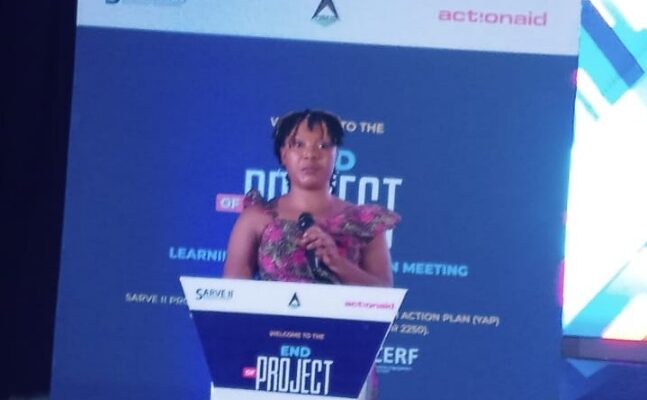 Actionaid country director, Ene Obi disclosed this on Wednesday at the end of SERVE II project learning and dissemination meeting and launch of the Kogi State Youth Action Plan for the domestication of United nations security council resolution 2250 held in Lokoja.

Obi noted that the organization has succeeded in engaging 1105 young men and women and also 509 adult women in Kogi State with valuable life and economic empowerment skills which will reduce their vulnerability to violent extremism in the state.

Represented by Actionaid Director, Organizational Effectiveness, Mrs Funmilayo Oyefusi, the country director explained that, her organization in partnership with Participation Initiative for Behavioural Change in Development (PIBCID), has in the past 6 years led the implementation of the System and Structure Strengthening Approach against Radicalisation to Violent Extremism (SARVE I and SARVE II) project aimed at building community resilience against violent extremism in Kogi State with funding support from the Global Community Engagement and Resilience Fund (GCERF).

She added that, in April 2019, ActionAid Nigeria continued to build on the successes achieved during the implementation of phase one of the SARVE project in Kogi state with expansion to 12 communities across 6 LGAs (Igalamela/Odolu, Ankpa, Adavi, Okehi, Lokoja and Kogi) in Kogi state.

Continuing Obi said, “The SARVE II project focused on identifying and digging deep into the fundamental causes of the types of violence that exist in the host communities and created opportunities for real time community-led solutions to prevent and address locally stimulated conflicts and restiveness.

Obi added that Actionaid has built the capacity of 120 mid and higher-level media professionals on conflict sensitive reportage, feminist journalism and peace building.

“In addition, 60 police officers (15 women, 45 men), were trained to respond to rising issues of violent extremism through the fundamental Human Rights Based Approach (HRBA) while working closely with existing community policing structures.

“Other landmark achievements include the establishment of 12 Conflict Management Alliance (LOCMA) structures in 12 LGAs in Kogi and Nasarawa States to prevent conflicts from escalating in the communities and promoting peace in the states at large.

“SARVE II Project has also achieved some milestones at the institutional levels with the enactment of Kogi Youth Development Commission Law, designed for the inclusion and engagement of youths in government and increased employment opportunities as part of efforts towards reducing the vulnerability of youths to violent extremism.

“In line with ActionAid Nigeria’s dedication to fighting poverty and injustice, which hinders development, the project supported and pursued the domestication of the United Nation’s Security Council Resolution 2250 that borders on Youth, Peace and Security, in Kogi State.

“The document fits perfectly into the framework of action for accelerating peace building and security in the state while ensuring that impact of previous conflicts among vulnerable groups/communities are mitigated”.

Obi explained further that ActionAid has been working in Nigeria since 1999 in various areas including resilience building. According to her, the organization believes that poverty is manmade, and their commitment is to see a Nigeria where every person enjoys his or her right to life with dignity.

“Globally, ActionAid works in 46 countries with the belief that a world without poverty and injustice is possible. Although originally founded by Cecil Jackson-Cole, a British businessman with the intention of supporting the education of 88 children living in poverty in India and Kenya in 1972; that noble gesture has reached millions of people across the world and metamorphosed into a full-fledged leading non-governmental organization globally.

“ActionAid is a global organisation that is dedicated to the fight against poverty; its vision is a world, without poverty and injustice, in which every person enjoys his or her right to life with dignity. ActionAid works in over 40 countries across the globe. ActionAid Nigeria has been working in Nigeria since 1999,” she added.

Earlier in her opening remarks, the Executive Director, Participation Initiative for Behavioral Change in Development (PIBCID), Halima Oiza Sadiq said the aim of the project is to reduce the vulnerability of the at risk young men and women, system and structure strengthening and creating an enabling environment towards reducing youth restiveness to prevent violent extremism.

She said, “It has been an exciting journey with great mile stones achieved.”

“These has been possible with the support of Kogi state Government who demonstrated their commitment towards the successful implementation of the project.

“Notable among the successes is the operationalization and setting up of the Kogi youth development commission board.”

Highlights of the event is the official
launch of the Kogi State Youth Action Plan for the domestication of United nations security council resolution 2250.