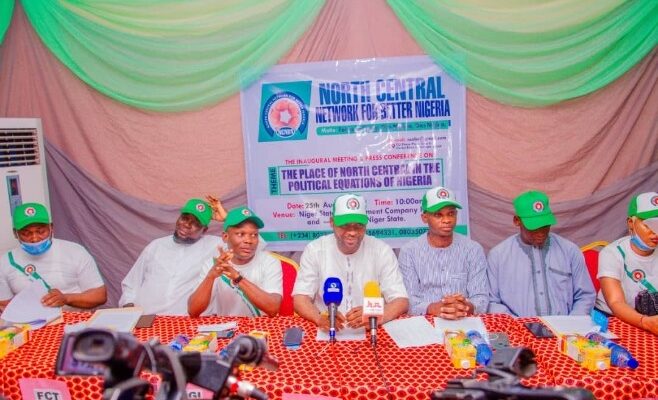 Ahead of of the 2023 Presidential election, a group under the aegis of North Central Network has appealed to other geo political zones of the country to concede the presidency to the Middle belt zone for equity, fairness and in the spirit of brotherliness.

At a press conference in Lokoja on Thursday, the Director General of the group, Comrade Jibril Abdullahi Muregi, noted that the North Central States which has become the melting point of politics between the North and the South should be considered for presidency in the forth coming general election.

This is as the group solicited for the transfer of power to the youths from the zone to bring unity, cohesion and good governance to the nation.

The group noted that although power rotation has been mutually implemented between the North and South on the presidency slot, while other lesser positions towered in the same direction within the remaining zones, the North Central States of Kogi, Plateau, Nasarawa; Kwara, Benue , Niger and FCT have not benefited from the presidency, despite her special roles in stabilising body polity.

Hey insisted that the region be given a chance in the 2O23 to present President for the country.

According to the Director General, although, prominent sons of the zone had led the country during the turbulent times of the country’s history and have successfully handed over power to democratic elected presidents, deserves to be supported to clinch the presidency.

Comrade Muregi said the association, which is both socio-economic and political, is aimed at advancing the cause of the region in the areas of social integration, economic emancipation, and political inclusion in all facets of national development through advocacy, sensitization, awareness creation, empowerment, and capacity building.

The group therefore urged the political stakeholders to uphold fairness, justice, equity, and inclusiveness in whatever decision they make on the political development of Nigeria.

“All geo-political zones should be treated equally and given equal opportunity to governance including the Presidency of this country. The practice where some zones are given preference over others should stop for the purpose of equity and justice.

“The unjust practice of favouring some zones over others have given birth to insecurity, violence, and disenchantment with attendant negative consequences to the Nigerian nation.

“That the North central zone which gave 55% of its votes to President Buhari in 2019 election making it the 3rd highest contributor ahead of South West, South East and South South should unanimously be given the exclusive right to produce the next president of Nigeria come 2023.

“Young Nigerians of North Central extraction should be given highest preference by all political parties to aspire for the Presidency of Nigeria in 2023. This position of ours is in line with the recent advocacy of President Ibrahim Babangida who said Nigeria at this time requires a young and agile leader.

“Young people have suffered many years of exploitation, opportunity denial and economic disempowerment. We call that this trend should immediately be reversed, and the Youths should be made the centre-stage of government economic policies. The CBN, BOI, BOA, NDE and other schemes should prioritize deserving youth in their packages.

“The wave of insecurity of lives and properties should be immediately addressed. The rising cases of banditry, insurgency, kidnappings, attack on schools, maiming of young people, inter-ethnic and communal clashes, religious crisis, and armed robbery should be put to immediate control.

“The Petroleum Industry Act (PIA) should be implemented in a just, equitable and transparent manner as to cover all deserving states and communities irrespective of locations,” he said.

The group stated that oil producing communities in Kogi State and emerging States of Niger, Kwara and
Bauchi where oil have been discovered in commercial quantities should immediately be brought under the benefits of the PIA.

Previous PostAEDC Staff Electrocuted in Lokoja Next Post'Capt. Wada is a Man of Peace With Progressive Conscience' - Gov. Bello Celebrates Predecessor at 71