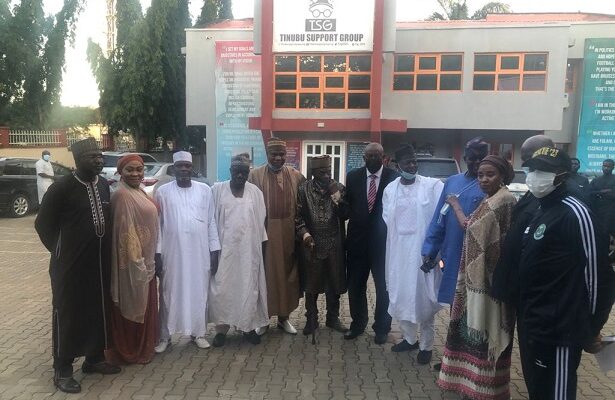 The group said out of all the qualified presidential aspirants, Asiwaju remain the most qualified with track records with wide national network.

The PSC’s National Coordinator, Rt. Hon Gideon Sammani, said this when he led other members of the group drawn from the six geo-political zones of the country on a courtesy visit to Tinubu Support Group (TSG) office in Abuja on Thursday.

He explained that the the former Lagos state Governor is the most qualified and acceptable candidate and has made great people.

“In Nigeria we can’t continue the way things is going, we want someone who can come and look at us from where we are and take us to the next level, we need a president who will touch lives.

“We know Jagaban has made great people we need men of ideas and what He is telling Nigerians is that he is not tired of being used by God to make people.

“We want to assure you that you have our support and it’s a bright new day for Nigeria. We wish Jagaban safe trip back home,” he said.

Responding, Hon. James Abiodun Faleke said the mandate of Asiwaju’s aspiration is to bring Nigeria back again to its glory.

According to the Federal Lawmaker, there were tremendous achievements under the administration of Asiwaju Bola Ahmed Tinubu as the Lagos state Governor.

“When Asiwaju assumed office as Lagos state Governor the revenue was six hundred million Naira and before he left office he increased it to Billions. He opened up Lagos for infrastructural development, roads that were constructed then till now it has not been patched till now.

“He left office since 2007 and till now he has not occupied any political office, no ministerial appointment, no ambassadorial and till now God has continued to make him relevant,” he concluded.