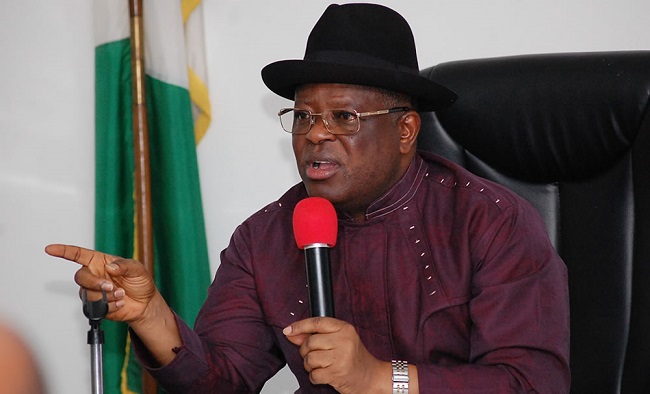 The Nigerian Society of Engineers (NSE), Ajaokuta Chapter, has endorsed the Presidential bid of Governor David Umahi of Ebonyi State.

The group led by its Chairman, Engr Abraham Aghadike, endorsed Umahi when they paid a courtesy call on the Governor at the old State Executive Chambers, government house, Abakaliki, on Wednesday.

Mr. Aghadike who spoke on behalf of the delegation said they were amazed by the magnitude of infrastructural development that had taken place in Ebonyi State in less than seven years of Umahi’s administration.

“We are amazed by the sheer magnitude of infrastructural development that has taken place in Ebonyi State in less than seven years. In fact, even as Engineers that we are, who are conversant with designs and construction of major projects, but I must say that the scale and scope of what we are seeing here, truly stagers our imagination. We are very proud of the laudable achievement of His Excellency, Engr David Nweze Umahi, FNSE, FNATE,” he said.

He said members of the Ajaokuta branch of NSE were fully in support of the presidential ambition of Governor Umahi, noting that the Governor had the credentials needed to seek and perform exceedingly well as the next president of Nigeria.

“We, the members of NSE, Ajaokuta branch, are not unaware of the higher calling of your Excellency, it’s the opinion of so many of us in this delegation that what you have done in one place should be replicated in other places.

“On that note, your Excellency, please, permit me to say, we are fully behind you in this higher calling that you seek. We believe that you have every credential to seek and perform exceedingly well in the higher office in this country.

In an interview with Journalists shortly after the courtesy call, Mr Aghadike was asked why they endorsed Umahi’s bid while their State Governor, Bello, is aspiring to be the next president, he said, “we didn’t really come to endorse Governor Umahi. But Like the Queen of Sheba said, we have come, we have seen and we are convinced. Whoever that is aspiring for a higher office, show us your work, if you have faith that it’s good.

“I’m not speaking on behalf of NSE, but as a home boy, and my members have said, this needs to be replicated elsewhere, that’s why we said, Governor Umahi will be better, first and foremost, as an Engineer, and secondly, from his antecedents as a Governor.”

Responding, Governor David Umahi thanked them for the warm sentiments they expressed on the modest achievements of his administration.

Represented by the Deputy Governor, Dr. Kelechi Igwe, the Governor charged them to ensure the revival of the Ajaokuta Steel Company, saying, it has become a major challenge steering on the face of the Nigerian Society of Engineers.