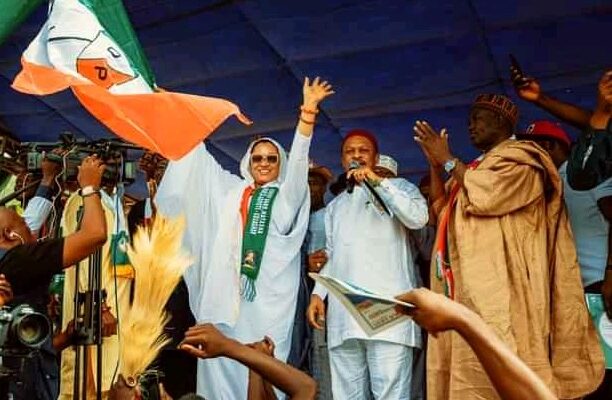 The political seasonal movie in Kogi State is becoming more interesting as Barrister Natasha H. Akpoti who newly got wedded to His Royal Highness Chief Emmanuel Oritsejolomi Uduaghan, Alema of Warri Kingdom, joined the political umbrella of the People’s Democratic Party (PDP) in order to strengthen and fasten her political wheels towards the attainment of her political ambition.

The Angel of Hope and political Amazon, as she’s being called, had in 2019 general elections contested for Kogi Central Senatorial district election under the umbrella of the Social Democratic Party (SDP) but unfortunately could not clinch to the helm of power as people believed that the party under which she contested was a feeble and a minor party that hasn’t acquired much magnitude of both human and financial resources to pilot and fearlessly defend the political will of her candidatures.

However, during those feeble days under the SDP forum, Barrister Natasha seems to be a fearless soul and a roaring lioness to her opponents anytime she gathers the crowd to minister to them. This and many other eye saws, such as the mammoth of crowd that gathered from the four corners of the world to grace her wedding occasion, and several other doings are what some people saw and has referred to her as “A man in woman attire.”

Interestingly, now that she has joined the strongest opposition party of the ruling party (APC) and now that the clock is ticking fast towards 2023 general elections, the political drama of who takes over power in Kogi Central is becoming more interesting; the tension of who will win or who will lose between both rivaling parties (APC and PDP) is becoming high, as people are eager and cannot wait to see the end of the poll.

Just like in the Western world, politics is an interesting game if practice with wisdom; as we all wait patiently and also join one political party or the other to elect our leaders in the forthcoming general elections, we should be reminded that before politics, humanity has been in existence, and as such, it should be regarded first.

As individuals, we must learn to shun politics of bitterness; election will come and go but brotherhood and neighborhood will remain. So we should tread with caution, avoid hate speech, shun political thuggery and violence, and above all, regardless of our political differences and ideologies, we should all have the progress of the State and the country in general at heart.

Spread the love
Tweet
Previous PostGov. Bello's Presidential Declaration: Time for the Youth to Rise and Save Nigeria Next PostDr. Muheeba Dankaka's First Year in Office: Impact, Achievements and Expectations for Second Year