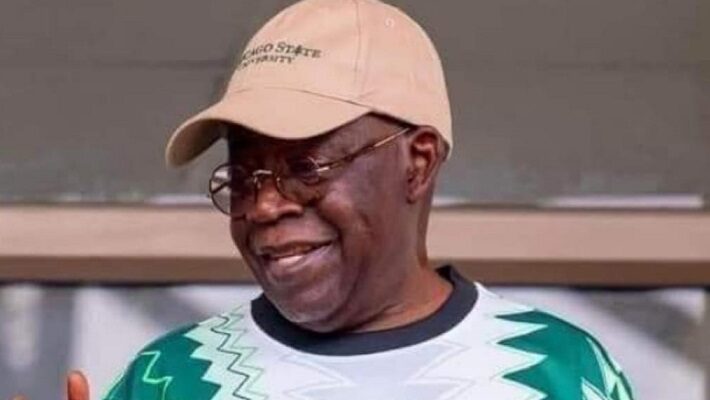 Former Nigerian Super Eagles players popularly known as the legends, have moved  the Tinubu/Shettima Nationwide Campaign Tour to  Kaduna North – West of Nigeria where they on Thursday mobilized sports enthusiast, footballers, fans of the round leather game, and youth groups in support of the All Progressive Congress (APC) president flagbearer.

For the North West Tour, the legends met with youth groups, football clubs, journalists, sportsmen/women, and other Critical Stakeholders in Kaduna and Zaria.

The Tour’s events and activities include: 60 teams Participation in a 5 Aside Football Championship for Tinubu/Shettima with representatives from all Local Government Areas at the Youth Teams Competition aimed at galvanizing Massive Youth Support for Tinubu/Shettima.

Youth groups and footballers in Nigeria’s North West Zone responded by endorsing and declaring support for the Tinubu/Shettima Presidential Project.

The groups claimed that the Tinubu Project was a good omen for Nigerian youths because Tinubu has lifted so many Nigerian youths to greater heights regardless of tribe, ethnicity, religion, or geographical zone.

The legends stated that the presidency is now in the turn of the South as the North has had their fair share of 8 years under President Muhammadu Buhari, and they also stated that Asiwaju’s performance as Governor of Lagos State remains unrivaled in Nigerian history. They noted that today, Lagos’ template is very clear and far ahead of other African states, and it serves as a good example for traveling around Nigeria beginning in 2023. The sportsmen urged Asiwaju to take football and sports seriously once he is elected President.

The youth are Nigeria’s largest voting bloc, accounting for more than 78% of the total voting population, and the Super Eagles Legend are doing everything they can to mobilize Nigerians to vote for Tinubu/Shettima in the 2023 Presidential Election.

Remember that President Muhammadu Buhari, who was represented by the Speaker of the House of Representatives, Rt. Hon. Femi Gbajabiamila, launched the Super Eagles Legends National Campaign on December 10, 2022 at the Prestigious Sani Abacha Stadium in Kano.

The Kano State Governor Dr. Abdullahi Umar Ganduje was the Chief Host, while the Secretary of the APC Presidential Campaign Council Rt. Hon James Abiodun Faleke alongside National Leaders and stakeholders of the Party were in attendance with over 60,000 fans of the Football World and Supporters of Tinubu/ Shettima at the Sani Abacha Stadium Kano, the entry pass into the stadium for both the Flagg off and North- West tour is show your PVC. The use of PVC is simply to encourage teaming supporters and grassroots young people and voters to collect their PVCs and vote for Asiwaju 2023 in large numbers.

In their separate remarks, the program’s conveners, Sylvia and Dr. Hassan, commended the Super Eagles Legends for disseminating the Tinubu/Shettima Presidential message to the grassroots and expressed joy over the message’s acceptance by thousands of youth groups in the North Western part of Nigeria and Nigeria at large.

They also thanked Chief James Faleke for his assistance in ensuring the success of the program throughout the country.

The tour train will now proceed to Bauchi, Bauchi State, North East Nigeria, and will be followed by Delta and Edo, both in South South Nigeria.

In a similar vein, over 10,000 football players and fans took part in the world record Kano Rally on Wednesday. A clear indication that the message of the Super Eagles legends is spreading faster than expected, they urged all Nigerian youths to join the Tinubu/Shettima Presidential Project as soon as possible.