Home News 2023 Census: Even Residents in Sambisa Forest Will be Counted – NPC Commissioner 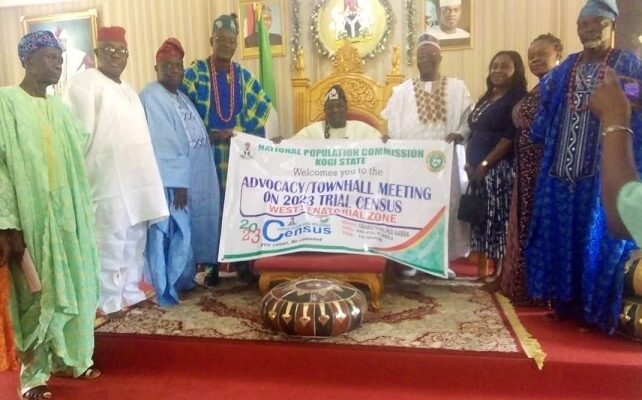 2023 Census: Even Residents in Sambisa Forest Will be Counted – NPC Commissioner

The Federal Commissioner in charge of National Population Commission in Kogi State, Professor Jimoh Isah, has said Nigerians should dissuade their minds from thinking that security situation in the country will affect 2023 Census in Nigeria, saying that if the National Population Commission was able to carry out Area Demarcation Enumeration in the 774 local government areas in the country despite security challenges, the next headcounts will not be hampered by security challenges.

Addressing traditional rulers and stakeholders at the palace of Obaro of Kabba, Prof. Isah said, it would not be proper for NPC to discuss measures taken by NPC to curtail security issues in the public, adding that all persons living in the country must be counted come 2023 Census.

The Obaro of Kabba, His Royal Majesty, Oba Solomon Dele Owoniyi, who earlier raised the question on insecurity also allayed fears over sufficient funds to carry out the 2023 Census successfully.

The NPC Commissioner, however, assured the Obaro that the Federal Government of Nigeria has already ear-marked enough fund for the cesus exercise, even as international organisations and countries are contributing to the success of the census financially.

However, the NPC, he said requires the support of communities all over the country to make the census a success because if the communities do not support the visitors with some basic needs and necessary hospitality, the enumerators will be overwhelmed with difficulties.

The Obaro, earlier in his welcome address assured the NPC officials of the inflicting support of the people of Okun Land, saying that the enumerators will be comfortably taken care of come 2023 Census.

The town-hall and advocacy meeting convened by NPC at the palace of Obaro of Kabba was attended by all traditional rulers, community leaders, youth representatives and market women as well as relevant stakeholders in Kabba/Bunu land, including Egbe.