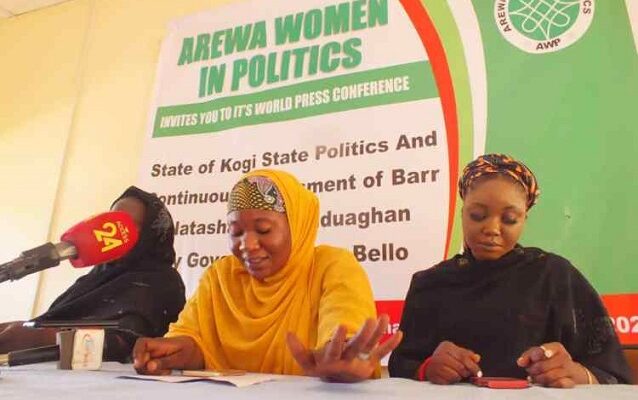 A group of women under the auspices of Arewa Women in Politics, a network of active women from various political parties, mainly from Northern part of the country, has expressed displeasure over the attacks and harassment of women in politics.

They alleged that the Kogi State Governor, Alhaji Yahaya Bello is trying to silence the PDP senatorial candidate in Kogi Central, Natasha Akpoti-Uduaghan.

Governor Yahaya Bello and Natasha Akpoti-Uduaghan have been at loggerheads after the state government alleged that she has a link with a terror suspect, Shafiu, and called on security agents to call her for questioning.

Natasha denied the allegation and also alleged on Channels TV that it was Governor Yahaya Bello that released Shafiu from prison and had been with him before he decamped to PDP few weeks ago.

The group led by Hajiya Maryam Abubakar Funtua noted that Natasha has remained a lone voice in the wilderness, drawing attention to the happenings in her state.

In a press conference reported by Arise TV,  the group expressed concern over what it described as attacks, intimidation and harassment faced by women in politics in the country.

The group alleged that the renewed attack on Natasha Akpoti-Uduaghan by the Kogi State government after she was allegedly linked to a terror suspect is aimed at silencing her and other women in politics.

They believed the renewed attack on the female politician is unconnected to her rising popularity amongst her constituents.

The group explained that PDP senatorial candidate has not done anything wrong by contesting for electoral position in Kogi State that would warrant the state government to call for her arrest and questioning.

While calling on politicians to support women in politics, the group noted that Natasha has been a lone voice speaking for her people and calling attention to the realities in her state.

The Arewa Women in Politics led by Hajia Maryam Abubakar Funtua, called on security agencies to protect Natasha and other women in politics across the country during and after the election.

They also called on the National Peace Committee led by former President Abdulsalam Abubakar to pay special consideration to what is playing out in Kogi, and called on other parties involved to create a level playing ground for women to participate in politics.

They called on international committee to equally set up a situation room in Kogi Central to ensure all promoters and perpetrators are punished and slammed visa ban.

Recall that after the state government alleged that Natasha has a link with a terror suspect and called on the security agents to arrest her, a fake document was subsequently released about how she got married to her husband and a blackmailing video of group of women that claimed to be from Delta State.

The group explained that the series of attacks launched against Natasha Akpoti-Uduaghan were aimed at silencing her to drop her senatorial ambition.

The PDP senatorial candidate in Kogi Central, Natasha Akpoti-Uduaghan, is the only woman contesting for National Assembly election in Kogi State.