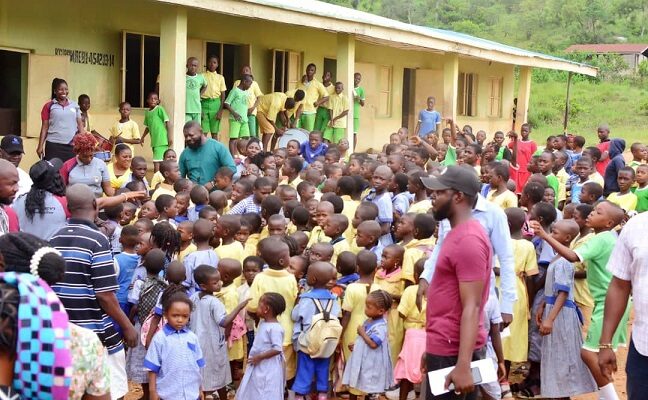 Osaseyi Foundation Doles Out ₦2m in School Fees to Pupils, Students in Okoro-Gbede

In pursuit of his desire to ensure that every child gets an education, no matter their background, the MD/CEO of Osaseyi Foundation, Mr Richard Osaseyi has donated the sum of two million Naira to pay the third term (2021/2022) tuition for pupils and students in all the public schools in Okoro Gbede in Ijumu LGA of Kogi State.

Mr Richard Osaseyi, during the presentation, said the gesture was part of efforts to contribute to educational development in his community, adding that being future leaders of the country, the students needed to be properly educated in order to be equipped to face the challenges of life.

He appealed to the students to take their studies seriously, saying that no matter where they are, it is possible for them to excel in academics and also in life.

He promised that the schools would witness renovation on the existing buildings as well as see new ones being erected in the nearest future.

Further, the amiable CEO pledged to make all the schools in Okoro Gbede the envy of other schools in the Gbedde community by setting up E-libraries and having the most vibrant computer laboratories.

The excitement from the students was palpable as they went wild with joy at such a wonderful gesture which would serve as a way of lessening the burden of their parents and guardians. The students indeed could not contain themselves as they jostled for handshakes with the Kind hearted CEO.

Mr Richard commended the efforts of the teachers at impacting knowledge on the students, urging them to remain steadfast in preparing the young ones for greatness.

In their responses, the Principal of UBE, Mrs Ologe V.O, Head Mistresses of both schools 1 and 2, thanked Mr Richard for his numerous support for educational development.

They described education as the bedrock of development whose value must not be subordinated under any reason, and called on other public-spirited people in the society to emulate the gesture of Mr. Richard by investing in education to guarantee bright future for children who are the future leaders.

Parents of the beneficiaries appreciated the philanthropist, Mr Richard for always coming to their aid through payment of school fees, writing materials and other extra curricular programmes. They prayed to God to continue to keep and increase the Osaseyi foundation in its endeavors.

Worthy of note is that this is the seventh edition of the Osaseyi Foundation scholarship scheme for pupils and students of Okoro Gbede.

The last two editions of the scheme has seen to over seventy percent of the beneficiaries already in various tertiary institutions. Indeed, the Osaseyi Foundation continues to be a beacon of hope for the less privileged and humanity.