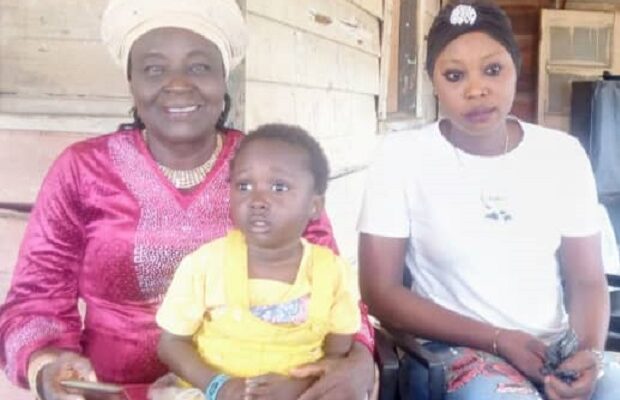 Mujanatu Ibrahim, three year old, was born with hopes and aspirations of becoming a great citizen to contribute her quota for the development of the country.

She was bubbling with life like any other normal child, until, late last year, when, she woke up with severe convulsion. Although, she was treated and became well, the trauma, was to be her albatross to live a normal life again.

Her ambition to have  a great future is being threatened with strange blindness if men and women of goodwill would not come to her aid to assist her for medical bills to correct the disorder.

Mujanatu Ibrahim’s mother, Rabiat Ibrahim, 29 years old, a barely literate and a petty trader, whose business has since collapsed to the demand of medical bills, which took her from one hospital to the other without respite.

While narrating the ordeal to Journalists at the NUJ, Kogi Council Secretariat on Wednesday in Lokoja  amidst sobbing, Mujanatu’s mother said the mystery blindness occurred about eight months ago when, she woke up vomiting. She disclosed that after first aid drugs were administered, she slept off and when she woke up in the evening, she couldn’t see again.

“In the cause of looking for remedy, i became a guest at all sorts of prayer and Miracle Houses, where i was told that  she was attacked by witches and wizards, that she needs spiritual solution. It was in these hopelessness, that a sympathiser introduced her to Madam, Rosemary Alabi, Executive Director, Dual Care and HIV Prevention Initiative.

Speaking to Journalists while begging Kogi State Government, individuals and corporate organisations to help the lad to regain her sight again, said, she felt pained and saddened for the three year old child to carry blindness through out her lives.

The Executive Director who is also the Coordinator North Central Zone of Civil Society on the Health Rights of Women and Girls in Nigeria, commended Governor Yahaya Bello for appointing her as the Chairman of Kogi State KOSACA.

Pastor Roseline Alabi also doubles as the State Co-ordinator, Society for Water and Sanitation, North Central and Coordinator of Civil Society Organization on the Health Rights of Women and Girls and Children, is the current Chairman of KOSACA.

Pastor Mrs. Alabi equally serves as the State Co-ordinator on Civil society organizations on Migration and Development and also North Central Co-ordinator of civil society organization on Cancer Eradication, noted that it was the challenges being faced by vulnerable women and girls that made her to establish her NGO which she has been using to bring succour to women across the states.

She said, the lad was introduced to her by some good Samaritans who have been following her NGO, stressing that after, listening to her story and hospital tests, she was convinced that there could still be medical remedy.

She appealed to the Governor, whom she described as the gender sensitive and a father to widows, orphans and vulnerable in the society to help offset the initial cost of Eighty thousand naira ex feeding and transportation to enable her undergo tests at the National Hospital Abuja.

In a show of humanity, the Chairman of Kogi State Council of NUJ, Comrade Momohjimoh Adeiza being weighed down by the pathetic story of little Mujanatu, donated the sum of ten thousand naira on behalf of the members to kick-start the process of restoring her sight.

The Chairman called on well meaning Nigerians to donate generously to save her from permanent blindness.

For assistance and support no matter how small, the general public and private organization can make contribution through: